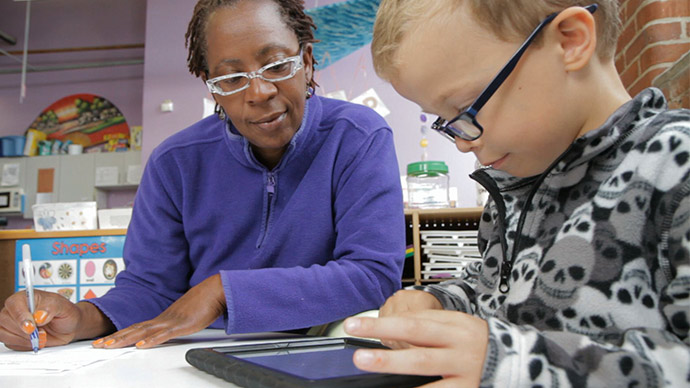 Research shows that children learn best through face-to-face interaction with caring adults. Nothing can replace the social, emotional, and cognitive benefits children gain from these interactions. We live in a world increasingly populated by technology, and mobile devices in particular are finding their way into the hands of the youngest children. This is why it is critical to conduct ongoing research, and to invest in approaches that are aligned with the needs and realities of today's early learners.

The First 8 Studios team at WGBH has partnered with learning scientists, content advisors, and preschool teachers, administrators, and children to lay the foundation for research-based early learning using tablet technology. After four years of research and development funded by the National Science Foundation, Early Math with Gracie & Friends™ leads the efforts as the cornerstone project.

Early Math with Gracie & Friends™ began as a design-based research project called Next Generation Preschool Math, which was funded by the National Science Foundation, to explore the extent to which tablet technology and apps could help children in preschool classrooms increase their mathematics knowledge in a developmentally appropriate way. The four years of iterative research and development focused on the development of a technology-infused curriculum comprised of eight learning apps for the iPad, 38 hands-on, non-digital preschool activities, and a digital Teacher’s Guide—all designed for preschool classroom use. Development was led by First 8 Studios at WGBH and research was led by the Center for Children and Technology at EDC and SRI International, with field-leading content advisors. The team partnered with preschool teachers, administrators, and children to guide every decision along the way. The efforts culminated in a rigorous randomized controlled trial (RCT) study that showed increased learning for children who used the app-infused curriculum supplement.

The project has generated a list of lessons learned about the effective integration of tablet technology in preschool classrooms. A brief list includes:

The research underlying Early Math with Gracie & Friends™ used an evidence-based curriculum design approach and started with the creation of a Learning Blueprint, a document created by early math and child development experts at EDC and SRI International. The Blueprint mapped out the learning trajectories for two curriculum areas: subitizing and equipartitioning, and served as an anchor for discussions and materials development during cycles of iterative design.

Based on the Learning Blueprint, app and curriculum designers at WGBH began a two-year iterative development process, during which over 50 tablet app prototypes and 100 non-digital, hands-on classroom activities were created and tested with children and teachers. Extensive user testing in New York, California, and Massachusetts helped cull the materials set to 8 tablet apps and 46 traditional classroom activities across the two curriculum units.

The team also developed a digital Teacher’s Guide, which provides a curriculum guide, interactive information for each activity, and professional development videos and modules.

The research teams at EDC and SRI then developed assessment protocols and pilot tested the subitizing and equipartitioning materials as well as the digital Teachers Guide. The pilot tests led to extensive feedback detailing areas of strength and opportunities for improvement. The WGBH team went back for another pass at the materials, delivering them for the RCT study that would implement the subitizing and equipartitioning curricula in their entirety. Results from the RCT were outstanding, providing some of the first solid evidence on the effective use of tablet technology in early math instruction.

Despite these documented affordances, integration of technology and media in early childhood classrooms is not common, partly due to the concerns about the effects of screen time on young children’s health and well-being.

Our approach for integrating digital resources differs significantly from the extended, passive, and/or isolated exposure to developmentally inappropriate media that has been associated with potential harm. We use digital resources that enhance teaching and learning, spur and support rich social interactions among children and through teacher mediation, and always complement effective, established teaching practices for preschool children through hands-on experiences. Our approach is consistent with the National Association for the Education of Young Children’s position statement (NAEYC, 2011).

Findings from this pilot study indicated that teachers and students considered the tablet games to be engaging and mathematically challenging. Findings also highlighted some necessary revisions (e.g., adding more “just-in-time” feedback and additional visual instructions), indicated that teachers varied in their level of comfort with technology, and suggested that children made progress in their understanding of target skills. Specifically, assessment items were found to have high internal consistency (.75 at pre-test and .76 at post-test), covered a wide range of item difficulty levels, and provided good coverage of the range of abilities represented in the study sample.

The NGPM curricular program was further tested using a small-scale cluster-randomized trial design to evaluate the potential impact of the NGPM units on student learning. Implementation findings suggest that teachers found the materials and activities useful and were able to successfully integrate them in their classrooms to promote mathematics learning. Overall, findings suggest that our materials resulted in significant gains in children’s learning of subitizing and equipartitioning when previous knowledge was statistically controlled (p=.026, effect size=.51).

Our Selected Posters and Publications

Tablet-based mathematics activities in preschool: Leveraging the benefits and confronting the challenges.

Effects of a preschool and kindergarten mathematics curriculum: Big math for little kids.

Technology and the future of preschool: Developmentally-appropriate and evidence-based approaches to integrating technology in the classroom.

The design of a tablet-based preschool math program.

Hugging technology: the social benefits of integrating preschool apps in the classroom.

Early Math with Gracie & Friends™ and Early Science with Nico & Nor™ and the characters and related indicia are trademarks of First 8 Studios @WGBH. ™/©2021 WGBH Educational Foundation. All Rights Reserved.